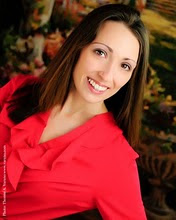 Guest Post from Amber Riley, Author of The Flash of a Firefly and The Well of Truth,
AND GIVEAWAY!

This is our first guest post! Featured is Amber Riley, the author of the Kindred Blood series. The first two books, The Flash of a Firefly and The Well of Truth have been reviewed on Forbidden Reviews (Click the titles to see the reviews). We are excited to have a post from Amber! Following Amber's post, look for your chance to win Amber's book, and a very special gift!

When building a vampire world, I think it’s important to first decide what you want from your vampires so it can be incorporated. Do they blend in or stick out? Do they keep their existence a secret or are they known to humans? Are they blood thirsty monsters or do they maintain some control?

Once you’ve figured that out, it will help you know what type of setting to use. The possibilities are endless. You can start narrowing it down by the population you need and the era that best suits the plot. I used big cities, set in current times, because that was what worked for my characters. In NYC, it was easy for Kaden to hide himself among the masses. It was normal for him to be out late at night and there were a lot of resources available to him that wouldn’t be in a small town – like stolen bags of blood, for example.

There are a lot of liberties you can take with vampires. They catch on fire in the sunlight, or maybe they don’t. I decided to go with the traditional vampire, but not all of the myths apply. Garlic just smells and they have reflections. It’s up to your imagination. Set the rules – they’ll affect the plot. As long as you’re consistent throughout, no one can tell you that you’re wrong.

Of course, there are always loopholes. If you do decide to break one of your own rules, you’re going to need to explain it. There has to be a reason. It doesn’t have to be a good reason, but there has to be some substance to back it up. If it doesn’t, part of the realism disappears. By realism, I don’t mean that the world has to be real. I simply mean that the readers have to believe it is. Vampires aren’t real – but make the reader believe that they actually exist within the world of the story.

Make the rules for your vampires, stick to them, and make it appear realistic by providing a solid basis.

And, most importantly – have fun with it.


Thank you, Amber, for sharing!

We are offering you the chance to win BOTH The Flash of a Firefly and The Well of Truth by Amber Riley. And that's not all! As a special treat, Amber is also offering a beautiful necklace (similar to the one on the cover of The Well of Truth). Enter below for your chance to win this awesome prize pack. (Open to US residents only. You MUST be a Forbidden Follower to enter. One entry per person. Contest will end on Friday, February 4, 2011).