***Forbidden Reviews will occasionally review movies, music, or other items.*** 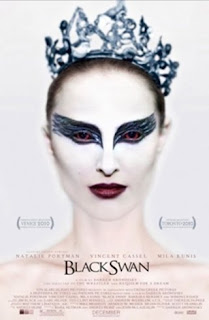 The Story: (From IMDb) Nina (Portman) is a ballerina in a New York City ballet company whose life, like all those in her profession, is completely consumed with dance. She lives with her obsessive former ballerina mother Erica (Hershey) who exerts a suffocating control over her. When artistic director Thomas Leroy (Cassel) decides to replace prima ballerina Beth MacIntyre (Ryder) for the opening production of their new season, Swan Lake, Nina is his first choice. But Nina has competition: a new dancer, Lily (Kunis), who impresses Leroy as well. Swan Lake requires a dancer who can play both the White Swan with innocence and grace, and the Black Swan, who represents guile and sensuality. Nina fits the White Swan role perfectly but Lily is the personification of the Black Swan. As the two young dancers expand their rivalry into a twisted friendship, Nina begins to get more in touch with her dark side - a recklessness that threatens to destroy her.

My Review: Last Friday, I had a "girls day" with my mother-in-law. We spent the day eating, shopping, and taking in a movie. We debated several possible movie choices, and we finally decided on The Black Swan. I am glad we chose to see this awesome movie.

Portman plays Nina, a ballerina who is, in a word, repressed (And no wonder, with her overly controlling mother played by Barbara Hershey). Nina wants desperately to make her mark in the highly competitive world of ballet, and tries to land the leading role in The Black Swan. To gain the role, she must be able to personify both innocence (as the White Swan) and seduction (as the Black Swan).

Nina easily dances the role of the White Swan, but she struggles representing the Black Swan. In spite of these difficulties, she lands the lead role. Nina becomes friends with Lily (Kunis), who coaxes Nina to "live a little." As Nina begins to explore her dark side, she begins a spiral that takes her further and further away from the innocent "white swan" she was in the beginning.

This movie was packed with beautiful dance sequences, and haunting suspense. Portman's role as Nina was superbly played. The Black Swan was achingly beautiful, not only with the dance sequences, but with the portrayal of the characters and the unfolding of the plot as well. It provided enough suspense to keep you on the edge our seat, wondering what would happen next.

I recommend this movie for anyone who enjoys "dance" movies, ballet, and/or psychological dramas. It was a wonderful movie, and I plan to see it again.

***5 Books represents and "It's Awesome" Rating. Odd to use books, I know, but we are working on our rating system, so for now we are still using the systems of our sister sites, BCM and PTB.
Posted by Unknown at 6:11 PM