Review: The Flash of a Firefly by: Amber Riley 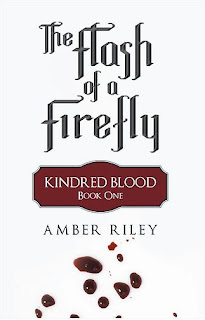 The Story: (from Goodreads)Trying to put his past behind him, Kaden moves to New York City where he creates a new life for himself. And that isn't easy, considering the fact that he's a six-hundred-year-old vampire who hasn't fed on a human in more than a century. Unfortunately, the past isn't something you can always escape from. When old enemies resurface, they come with a message. His master wants him back and refusing isn't an option. Confronted with losing both his freedom, as well as the human that has captivated him, Kaden struggles to hold onto his humanity while controlling his darker side. He knows the showdown is inevitable. He must find a way to stand his ground.

My Review: When I read the above summary, I thought "sure, why not." I will readily admit that I am rather "burnt out" on vampire stories, but this one sparked my interest. I was further impressed when I received the book and saw how short it was. I thought, "this won't take long."

The basic premise of The Flash of a Firefly was interesting, but not exactly original. It took me a bit to read the book, because I found myself putting it down to read other books. As I made it to the middle of the book, I was suddenly sucked into the story. The action really picked up, and I quickly finished the novel. It ends in a rather gigantic cliff-hanger, but I have high hopes for book two, Well of Truth.

I debated the rating I should give this book. The fact is, I actually LIKED the book. Had the entire book been as well written as the last half, I could have easily given it a 4. The fact remains that there were some issues with the book; but as I said, I do have hopes the book two continues the same vein that book one ended...