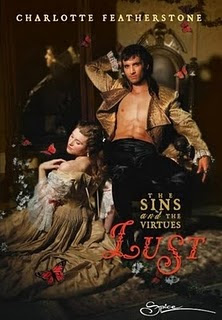 ***I received this book for review from NetGalley.***

The Story: (from Goodreads) Of old, humans and Faeries have dwelt side by side in parallel realms. Only the canniest mortals recognize the alluring creatures that often walk—and lie—among them.

The righteous Fae of the Seelie Court cherish an ancient quarrel with their Dark counterparts: a curse born of anger and deceit. The Unseelie Court will perish unless one of its princes can win a woman's love—honestly, without coercion…and love her wholly in return.

To halt the slow demise of his people, Prince Thane—the embodiment of Lust—infiltrates the Georgian court to seduce his mortal inverse. Noblewoman Chastity Lennox is purity incarnate—a sensual prize well worth winning. But Thane's carnal quest proves more challenging than he ever dreamed.

My Review: This was the first time I have read a Charlotte Featherstone book; I can safely say that it will not be the last. The title, Lust, was enough to grab my attention. When I read the blurp, I knew I had to read this book. Set in Georgian England, the Unseelie Fae Court is on the brink of death. Seven of the Unseelie Princes, each the embodiment of a sin, must find their counterparts, a woman who is the embodiment of the virtue that opposes their sin. In order to break the curse of the Seelie Court's queen, each of the "virtues" must willingly go the Unseelie Court.

Prince Thane is the embodiment of Lust, and a delicious character he certainly is. His counterpart, Chastity, is as endearing as Thane is tantalizing. As their story unfolds, the reader gets a glimpse of the the other "sins" and "virtues." And from what I read in Lust, their stories promise to just as steamy and fascinating as this one.

I believe what I liked most about this book (aside from the steaminess factor) was that there was an intriguing storyline. Often times with books that fall into the erotica genre (or even tease around the borderline between romance and erotica) lack this very important aspect. While a steamy story is fun to read, its so much better if there is actually a good storyline with it. I was pleased that this book had just that.

Now I just have to be patient and wait for the next Sin to find his Virtue.....

**Please Note: While Forbidden is under construction, we will use the rating system of our sister sites. 4 "Books" reflects a "Loved It" Rating.