Review: The Weight of Water By: Anita Shreve 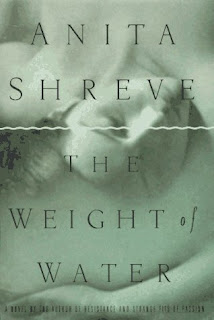 The Story: (From Anita Shreve's website) In 1873, two women were found brutally murdered on a small island off the New Hampshire coast. A third woman survived the attack, hiding in a sea cave until dawn. More than a century later, a photographer, Jean, comes to the island to shoot a photo-essay about the unsolved crime. She becomes obsessed with accounts of the dead women's lives in this barren fishing town: the long stretches of loneliness, the relentless winds that threaten both people and their property. Is marital misery connected to the killings? Jean's marriage is enduring heavy weather of its own. On the boat she has chartered for this project, she and her husband are growing more distant from each other. Their nights are full of drink and terrible silences, and Jean feels jealousy and distrust invading her life and her work. The forces that blasted the island a century earlier come alive inside Jean, bringing her to the verge of actions she never dreamed herself capable of -- with no idea whether her choices will destroy all she has ever valued or bring her safely home.

My Review: This book had been recommended to me several times by two good friends. Whenever we get together, we discuss our current reads which leads to discussions of past books and favorites. The discussion nearly always involves a mention of The Weight of Water. I finally decided that it was time to discover what was so fascinating about this book.

In The Weight of Water, Shreve intricately weaves together two haunting stories. The "present day" story is about Jean and Thomas (wife and husband), and their daughter Billie. There are two other characters who play a large role (Thomas's brother and his girlfriend), but ultimately the story is about Jean, Thomas, and Billie. Jean also narrates the "past" story by reading the court transcripts from a trial, and the translated papers of a Norwegian immigrant, Maren. Maren survived an attack in 1873 that left her sister and sister-in-law dead.

The unfolding of these two stories was incredible. The way that the two are carefully crafted together, using an actual event (the murders in 1873) as a mirror to reflect the unraveling of Jean's life was profound. I can certainly understand what the talk is all about concerning this book. This is not a "happily-ever-after" book; nonetheless, it is hauntingly, terrifyingly beautiful.

***Please Note: While Forbidden Reviews is "under construction," we will use the rating systems of our sister sites. 5 Books reflects an "It's Awesome" rating.
Posted by Unknown at 11:00 AM