Review: The Well of Truth by: Amber Riley 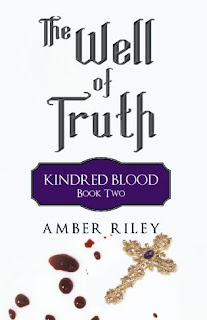 The Story: (from Goodreads) Kaden has made a promise to the Iustitia. In exchange for helping the vampire hunters rid Rome of their supernatural infestation, he will never be hunted by the church—assuming he makes it out of the country alive. With a master vampire who is letting the city be terrorized, Kaden must uncover his true motives before it is too late.

Something dangerous is closing in on Kaden, and he cannot afford to be weak. Inside Vatican City, the vampires are more vulnerable than they have ever been. But with his independence on the line, Kaden is breaking every rule in the book, putting everyone’s lives at risk. Worse yet, he is feeling things again—things he has not felt in centuries. He must find a way to completely sever his ties with the past. Unfortunately, in a city that is supposed to be off limits to all vampires, Kaden finds more than he bargained for—and loses even more.

The Well of Truth tells a haunting tale in which a hardened vampire will realize that some secrets are better left in the dark.

My Review: The Flash of a Firefly ended with a huge cliffhanger. I was anxious to see what would happen in this book.

The Well of Truth continues the story of Kaden, a vampire for over six centuries. He travels to Rome, a place forbidden to vampires. More dangers await him there than he imagined, not the least of which are the members of the Iustitia (vampire hunters) that he is supposed to be working with in a bizarre deal that he's sure he should not have made. The secrets that Kaden begins to unravel could well mean not only his death, but the death of multitudes of others: human and vampire alike.

I was pleasantly surprised with this book. The Flash of the Firefly started rather slow, and I often put it down for other reads. The Well of Truth, however, was more fast paced; I read it in one sitting, and quite enjoyed it. This book, too, ends with a major cliffhanger. Now, I just have to be patient for book three...

Amber Riley graciously agreed to do a guest post for us (our first!!). We will also have a very special giveaway. Check back tomorrow for more details!

My Rating:
I found this book more enjoyable than the first, so I give it...