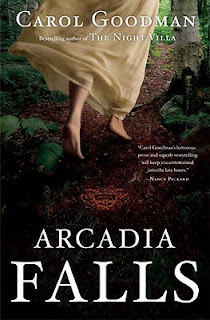 Title: Arcadia Falls
Author: Carol Goodman
Released: March 2010
Publisher: Ballantine Books
The Story: Financial straits and a desire for a fresh start take recently widowed Meg Rosenthal and her aloof teenage daughter, Sally, to Arcadia Falls, a tucked-away hamlet in upstate New York where Meg has accepted a teaching position at a boarding school. The creaky, neglected cottage they’ll be calling home feels like an ill omen, but Meg is determined to make the best of it.

Then a shocking crisis strikes: During Arcadia’s First Night bonfire, one of Meg’s folklore students plunges to her death in a campus gorge. Sheriff Callum Reade finds the presumed accident suspicious, but then, he is a man with a dark past himself. Meg is unnerved by Reade’s interest in the girl’s death, and as long-buried secrets emerge, she must face down her own demons and the danger threatening to envelop Sally. As the past clings tight to the present, the shadows, as if in a terrifying fairy tale, grow longer and deadlier.

My Review: Arcadia Falls is best described as a fairytale come to life; but like with most "fairytales" the true meaning of the story is more haunting and deadly that the stories we heard as children. Carol Goodman does an amazing job describing the setting of the story, her detailed descriptions makes it easy to imagine and really brings the story to life.


Megs story starts 3 years into the future, but I wanted to give you a little back story. Meg is the wife to a Morgan Stanley trader, a college student, and a mother of a talented teenage daughter. She lived in a upstate New York McMansion, life was good - but then her husband Jude decides to give it all up for a job he loved. Meg supported him, but did not know about the choices he was making to get his company off the ground. Jude dies unexpectedly, leaving Meg and their teenage daughter Sally with nothing- he has withdrew the savings, college fund, and borrowed against insurance polices.


Meg sales everything off, and takes a job as a folklore teacher at an "unconventional" boarding school, which was started by two artist Vera Beecher and Lily Eberhardt. Although the pay is low, the perks of taking a job in Arcadia Falls give her something to look forward to, she is hopeful; hope is exactly what she needs, since Jude's death, Sally keeps slipping further and further away from her.


On the way to Arcadia Falls, things are looking good- Sally and Meg are talking about their family history in Arcadia Falls, and how the setting was inspiration for one of their favorite books. The first few days at Arcadia Falls seem to be going ok, Sally is making friends and the students are preparing for the "First Night" bonfire. The night of the bonfire, one of Arcadia's top students, Isabel Cheney, comes up missing, she is later found dead at the bottom of a ravine- the same ravine Lily Eberhardt (school founder) is believed to have fallen into during a blizzard.


While settling into their new home, Meg stumbles across Lily's journal. As she starts to read, she discoverers the "folklore" about Lily, the school, and what happen the night she died, is not exactly true. As she starts to "investigate" Lily's death, she wonders if Isabel's was really an accident. The local sheriff also seems to think the school is hiding something. Lots of chemistry between the sheriff and Meg, they try working together to figure it all out, but he ends up being more of a distraction.


I thoroughly enjoyed this book. It is not something I would normally read, but I am glad I did. If you like a more contemporary style book, with a little romance and mystery this is a great choice.

Until we have our rating system up we will be using our sister site ratings.
Posted by Pixie at 7:52 AM

Arcadia Falls sounds like a good read. I'll have to check it out. Thanks for the review.