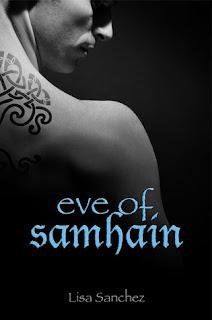 The Story: (From Goodreads): As a college senior and server at Hanaford Park's hottest nightclub, twenty-one year old Ryann Pierce's plan was simple: work hard, make lots of money, and avoid the ass-grabbers at all costs. What she never planned for was Quinn Donegan—the living, breathing advertisement for sinful behavior that waltzed into her life.

With an angelic face, a hard body and a butt-load of charm, Quinn had a way with the ladies—a lot of ladies. Cursed with a deadly, addictive touch, his trail of indiscretion blazed across five hundred years. Tired and jaded, Ryann is a shocking revelation Quinn didn't see coming.

My Review: I love paranormal romance; I can't seem to help myself. When I received a request to review Lisa Sanchez's Hanaford Park Series, I did not hesitate to accept.

In Eve of Samhain, Quinn is the legendary Gancanagh, a magnificent fae who's very touch seduces women. While he spent centuries not caring about the women he came in contact with, his attitude changes when he meets Ryann. Having fallen in love for the first time, he is determined to keep her safe from the dark being that stalks her, and to keep his hands off her so that she does not succumb to the curse that is his to bear.

Ryann finds Quinn to be nearly irresistible, but resist she does, for she doesn't wish to be one of his conquests. However, even without his touch, she soon finds herself falling head over heels in love. and she discovers that giving in to their mutual attraction, and the pleasure of being in love, is the only way to save Quinn from a terrible fate on the Eve of Samhain.

As Quinn fights to keep Ryann safe, and Ryann seeks the solution to Quinn's curse, will they accept that love is the answer, or will death claim one or both as their time runs out?

There was so much that I loved about this book. The story was fabulous. Sanchez weaves a beautiful story of love, fear, and triumph. The characters and plot line are well-developed, and it's steaminess factor is certainly way up there without being the focal point of the book (I hate to read stories that are entirely focused on the sex and lack well-developed plots- I mean, what's the point? This book certainly did not have that problem.)

This book was fun to read, and to be honest, I couldn't put it down. I read it in one sitting, and as soon as I finished, I started the second book in the series, Pleasures Untold. You'll have to wait until tomorrow to read about that one though.

(Be sure to check back Tuesday and Wednesday- we have some awesome stuff in store for you.)

(I rarely ever give a 5, but given the fact that I couldn't put this book down, I believe Lisa Sanchez has certainly earned it.)

Thanks, E.J.! We appreciate that you stopped by!

Sound really good. I can't imagine how hard it would be to be in love with someone and not touch them. Crazy.