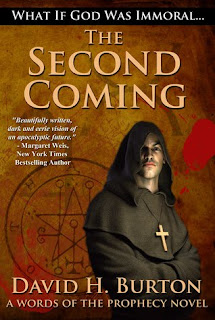 The Story: Five hundred years have passed since the Earth shifted on its axis - a catastrophic event that wiped out civilization and released the powers of the dead. Now, a dark age shrouds our world once more.

Journey into a future rife with witchcraft, demons, and vengeful gods that have returned to reclaim their former dominions. Follow the fates of three intertwined characters in this sinister new realm: Paine, a young man cursed with the ability to summon the dead and on the run from Witch Hunters; Brahm, the battle-hardened woman that slaughtered his mother and in whose body the woman's soul now resides; and John, a friar once imprisoned for heresy, now assigned by a woman Pope to destroy the boy he unwillingly fathered. Take a voyage to the future as the legions of heaven and hell combine to bring the WORDS OF THE PROPHECY to fruition.

The Second Coming is nigh.

And the God we expect to deliver us from evil is not who He seems.

My Review: David Burton has quickly become one of my favorite authors. Why? His writing is exactly what I look for: something DIFFERENT. Yes, yes, I enjoy the sappy romance novels, the intellectual histories, and the various best sellers that I read; but, I also love it when I find a story that flies in the face of conventional thought. The Second Coming certainly qualifies as "unconventional."

Burton's ability to create a world with the written word astounds me. In The Second Coming, the earth has shifted on its axis; this catastrophic event resulted in the release of beings that have not roamed the earth in ages, and civilization as it was known is no more. There are demons, necromancers, Soul Runners, and more. Oh, but the fun does not end there in this fast paced ride.

There's Paine and Lya, a more interesting set of twins you will never meet; Brahm, a Soul Runner who actually has two souls in her body; John, a heretic and perhaps not quite what he seems; and many other characters who play fascinating roles as the story unfolds. Nothing is ever as you think it will be. This book will have you racing through the pages just to find out what will happen next, and how the characters will respond to each introduction and new event. Oh, and did I mention that the lines between good and evil may not be so clear cut?

This book is a great read for anyone who likes to shake things up a bit. If you are easily offended by (or even defensive about) the role of religion, you should steer clear of this book, because, believe me, this book will offend you. However, if you enjoy a challenge to convention, read this book; I think you'll find it as intriguing as I did.

*We are currently using the rating system of our sister sites until our own rating system is complete. 4.5 books reflects a rating between "Love it"(4) and "It's Awesome." (5)

*****Check back tomorrow for an awesome interview with author David H. Burton!*****