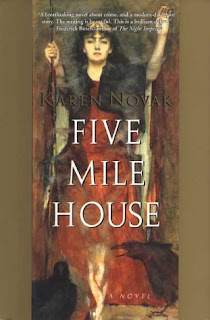 The Story: (From Goodreads) Karen Novak's remarkably polished first novel is a story of two women separated by a century and linked by the suspicion of madness and the lingering traces of guilt. In 1889, Eleanor Bly murdered her six children and flung herself from the tower of Five Mile House. More than a hundred years later, her ghost, who narrates much of the novel, reaches out to Leslie Stone, a New York cop who has killed a child murderer and is haunted by her action. The house is their common ground. When Leslie's husband comes to Wellington to restore the house for a deep-pocketed local historical organization bent on marketing the town's local witch lore to the vacationing masses, Eleanor finds an audience and Leslie finds... what? "Her fascination with the house was indeed connected to something else, and if she stared at Five Mile House long enough the image before her would rearrange itself into the form of what she really sought."

Eleanor and Leslie (whose physical resemblance to the 19th-century Medea is uncanny) are, of course, on mirroring quests for redemption, a prize which, the madwoman's ghost realizes, carries a heavy price: "I do not crave the truth; I dread it.... Yet, without the opportunity to tell my story, all that is left me is the ephemeral, disjointed speculations of others. It is for this reason I protect Five Mile House, to hold my story safe. I protect it from the living who climb the hill to see the relic of a mad woman and pay no heed to the implications of madness in the house itself."

The trope of the madwoman in the attic has a long and distinguished literary history (think Jane Eyre), and contains a complex tangle of repressed sexual power, threatening desire, and narrative control. Novak uses the metaphor as a springboard into an exploration of history and memory--and into a rollickingly good story, complete with a search for an ancient godhead text, battling covens, and herb-induced suicide. Skillfully interweaving its 19th- and 20th-century tales, accelerating toward a simultaneous revelation of treachery and murder, Novak's ghost story is astonishingly well-balanced, elegant, and spooky. The author's deft touch imbues the novel with a dark gothicism that never veers toward the eye-rolling, shoulder-shrugging absurd. Her first effort should win Novak a legion of fans. --Kelly Flynn

My Review: Lets start with the good and end with the bad. Five Mile House was a creative story. It was a mix of ghost story, some supernatural, and some emotional literature. It had an originality to the ending, or the final explanation for the madness, that I found surprising and enjoyable. I found that the book did not give too many details away too soon. I didn't figure out what was going on or "who done it"or why until I was meant to.

I found the character Eleanor to be fascinating in her madness and her story is what keep me reading this book. She was a haunted soul who wanted to tell her story, even if it wasn't a good one or if it didn't had a happy ending. Their is some beautiful writing and sentence structure in retelling her story, which is evident in the story summary above.

OK, in with the bad. The fact that is the authors first novel is evident in the choppy writing style and some editing errors. I did not realize until I was putting this review together that this is the first of 2 novels on Leslie Stone. In my opinion, the ending of the story did not leave a real need to hear anymore on Leslie, so this I found surprising. I did not find Leslie to be a likable character. I, in fact, down right disliked her. Her priorities were never in order, I found her to be whiny, selfish and neglectful. Her only redeeming quality to me was that she killed a child murderer rather then let him go free, and that happened in the first pages of the book. It is hard for me to grasp why she is so haunted by this act that she lets so many other facets of her life go to waste.

The story had abrupt changes in characters from Eleanor's to Leslie or vice verse that sometimes had me back tracking to figure out who was narrating. Overall, I am sure this is someone's cup of tea, but it is not a book I will read again. I would recommend it for anyone that enjoys a unique ghost story and it is a favorite book to a friend of mine, so maybe their are some redeeming qualities I am missing. 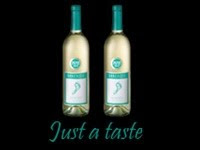