Review: The Myth of You & Me by Leah Stewart 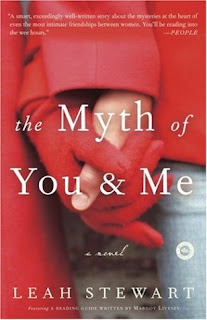 Review: The Myth of You and Me by:
Leah Stewart
Release Date: April 25, 2006
Publisher: Random House Inc
Genre: Fiction
The Story: (from Goodreads) When Cameron was fifteen, she and Sonia were best friends—so close it seemed nothing would ever come between them. Now Cameron is a twenty-nine-year-old research assistant with no meaningful ties to anyone except her aging boss, noted historian Oliver Doucet.

Nearly a decade after the incident that ended their friendship, Cameron receives an unexpected letter from her old friend. Despite Oliver’s urging, she doesn’t reply. But when he passes away, Cameron discovers that he has left her with one final task: to track down Sonia and hand-deliver a mysterious package to her.

The Myth of You and Me captures the intensity of a friendship as well as the real sense of loss that lingers after the end of one. Searingly honest and beautiful, it is a celebration and portrait of a friendship that will appeal to anyone who still feels the absence of that first true friends.

My Review: For the last few weeks I have picked up and put down a dozen books that have not caught my interest right away. I have had a lot of things going on and have had little time to read so I felt like I couldn't waste what time I had on something that was not excellent. I read the first few pages of this book at a stop light on my way home from work and I haven't been able to put it down since. I read this entire story over this weekend that included the GMAT test and a huge family dinner.

Cameron is at times unlikable but you can immediately sympathize with her. She has chosen the safe road in life. Oliver's death sets changes her path of wandering and leaves her with the only direction possible to take is the one he lays out for her. She HAS to know what it is the package and she has a need for some closure on why Oliver sent her on this final mission.

The story changes from present day to the girls teenage years from the time they were 14 until the time they graduate college, all told from Cameron's viewpoint. Each change leaves you with a cliffhanger or bombshell that ensures that you read through the entire next section so you can get back to the the present or past.

The story line is not necessarily original, but it is a excellent read for anyone who has loved and lost a great friend from the past who still longs to try to figure out why and how they got to this very point. One theme from the book is that everyone has one moment in their life were their choices caused a complete life changing moment and how can we help it as mere humans to not wonder what would have been if we had not made that choice?

I recommend this read to anyone that has a weekend to devote to excellent reading!

**Forbidden Reviews is currently using the rates of our sister sites. 5 Books means "Its Awesome"

Amy, your review was cool! It made me want to buy this book right away and start reading it! :)