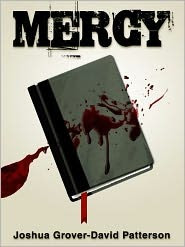 I had the pleasure of asking author Joshua Grover - David Patterson some questions about his latest book. The book Mercy was an excellent read; you can check out my review on yesterdays blog. Below is my interview with the author and information on where you can get your own copy of Mercy instantly!
FR: Mercy is an excellent read and is a story of the dead coming back to life as Zombies. What inspired you to write this book?

JGDP: "I’ve always been a big fan of the George Romero zombie movies, and one day my brain offered up a couple of “what if” statements.
What if a plane crashed on an uncharted island, and only a couple of people survived? What if all the people who died on the plane came back as flesh-eating zombies. After that came more questions. How do they survive on the island? How do they get off the island? Is the rest of the world overrun by the living dead, or just this island? I knew I had reached the end when I had answered most of my questions.

FR: Your character selection and development were excellent, any reason why you chose the people you did?

JGDP: I’ve been struggling with the best way to answer this question, because it has a really long answer that ends, “Yes and no.” Personality-wise, I let the characters just “talk” as I typed, and went back later to smooth them out and make them consistent. But in a couple of ways, I hand-selected the people who wound up on the island.
First, I wanted a reasonably broad spectrum when it came to race, age, and general social class.Second, I wanted to have a small number of characters.

These two things don’t really go together, but I thought both improve the story. If you have a huge cast, I think the average reader will assume some of them are just meat, and wait for them to get eaten.But by keeping the cast small, everyone counts. You can’t really care about 100, or even 20 characters, but you can care about five, or six, or seven.

And when you lose one, it affects the story, and hopefully the reader.

From a story standpoint, it also became necessary to determine what skills my little band of survivors would need to live on an uncharted island for an indefinite period of time.

At the same time, I had to counterbalance whatever skills they had with something else that wasn’t so good. This was kind of tricky, too, and there’s a reference in the book to how TV shows always seem to have a ninja who can do everything. I wanted to avoid that.

So I had people like Antony, an Eagle Scout, on the island. The catch is, he’s kind of a terrible Eagle Scout, and so all his knowledge is half-remembered and frequently semi-useless. He can build a shelter, yes, but it falls apart at the slightest provocation.
FR: The book is named Mercy. Was this to enhance the longing / survival need of Georgina to get back with her daughter Mercy or was this a build on the group’s survival but compassionate nature, or something completely different.

JGDP: When I started the book, it was called “Zombie Island.” Midway through the writing of the novel, I learned that George Romero was making another film in his “Night of the Living Dead” series, with the working title of “Island of the Dead.” (He eventually changed it to “Survival of the Dead.”)

I already felt my title was a little iffy, and this gave me a good reason to come up with another one. I asked friends for suggestions. My favorite was “Dead in the Water,” but it still wasn’t exactly what I was looking for.

The main character is writing down the events that are happening to her in a journal in hopes that her daughter, Mercy, will one day get to read it. Eventually I realized that the concept of mercy also was thematic in the novel. Every character is searching for mercy of one kind or another. And so, “Mercy” became my temporary title.

FR: Where can others get Mercy?

The book is available on Amazon for Kindle Download for $2.99.
It’s currently at Barnes and Noble for download on the Nook, also for $2.99:

FR: Is there anything you want to tell potential fans?


JGDP: As for other things people should know about my book… If they want to read part of it, they can check it out here:

As some of our fans at Forbidden Reviews may not have read any good Zombie novels to compare this one too, some stories that you may have enjoyed that have similar struggles are: If you enjoyed the underground bunker and survival of The Host by Stephanie Myers, If you enjoyed the book Dust by Joan Frances Turner but you could use a lot less gore then this book is definitely for you!