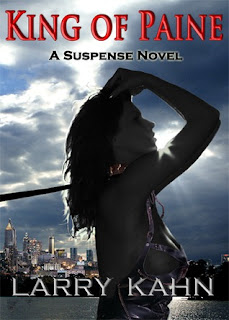 What does the back of the book say?

Jolynn Decker, a young starlet-turned stripper, steams up the pages as Frank Paine's vengeful ex-girlfriend. When she emerges as a suspect, Frank's unique interrogation is unforgettable.

As true to myself, I did not read the back of the book, so lets start with my favorite part, the cover. The first thing I notice is the young lady standing with her hands on her head. Something looks like its coming from under her hair. Behind her is a body of water with a cityscape in the background. The sky looks like a battle between the dark rain clouds and the sun both trying hard to win over the city. Of course these things have raised so many questions. For instance, who is the lady, and what on earth is that trailing from her hair? Is it about to rain or not, and does that mean something? And I'll admit the first thing I said when I saw the city was, "that looks like a fun place to live. I wonder where it is?"

After reading Larry Kahn's book King of Paine, I felt like I was on the most perfect roller coaster, (well for roller coasters lovers that is), if not a roller coaster lover, than picture experiencing every emotion expected while reading a great book, all the "oohs" and "ahh's" with a lot of sit on the edge of your seat moments. That was how I felt. And I really wanted more!

The author Larry Kahn gently guides you into a fascinating world. He literally allows your mind to run free, while still staying extremely connected to the story line. Although that may sound odd, once you read this book, you will know exactly what I mean.

The main character Frank Paine is a former Hollywood star turned FBI Agent that has some major problems. Then you meet the sultry Jolynn Decker, who has major secrets. You do the math problem: secrets + problems + Hollywood + other intriguing characters + FBI= (Nope, that's not it!). That's whats so fantastic about this book, it's not your ordinary cat and mouse type of mystery. This book kept me guessing all the way to the end.

An interesting cast of characters are introduced, one for everyone, depending on your personality. Once you've identified your favorite character, that is where the fun begins on a roller coaster ride of who done it, oops, no they didn't. But it's not just that, the story makes you think and ask yourself some really important questions.

This book had the perfect balance. Never once did I feel lost or confused. Be well warned, this book is not for the faint at hearts, this book will open you up to some major thoughts and questions after your done reading it.

Without a doubt, I'LL HAVE ANOTHER!

About the Author: (from Goodreads)

Larry Kahn, the author of The Jinx and King of Paine, successfully negotiated the fast-paced world of domestic and international mergers and acquisitions for twenty years, first at a major New York law firm and then at an Atlanta Fortune 500 company. He penned The Jinx while on sabbatical in 1999 and is now devoted to writing fiction full time. Many of his more cynical legal clients and associates have accused him of writing fiction full time for many years. He resides in Atlanta with his family. Larry developed a keen interest in social issues while attending Yale Law School, an idealistic spirit that continues to spice his novels. The vision of a colorblind America in his political thriller The Jinx led to endorsements by leaders of the ACLU, National Urban League and Artists Against Racism. And as the Baby Boomer generation scatters about the country, King of Paine envisions a renewed emphasis on family and tradition in which Americans create for their venerable elders, and ultimately themselves, a peaceful place to die. 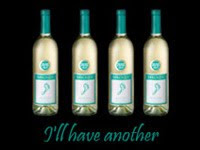 Be sure to check our Larry Kahn's website. His blog tour is just about to start. There will be contests to enter, which means FREE STUFF!!! So go to his website and see! 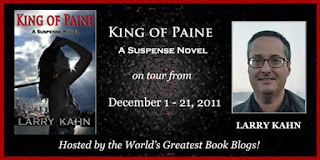 Thank you for the fantastic review, Syreeta. It's always nice when a reader truly connects with my story. I hope your followers enjoy it, too!