To go with today's Waiting on Wednesday post, I wanted to review books #1 and #2 in the Dorina Basarab series by Karen Chance. For those of you unfamiliar with these books, they are a "spinoff" of the Cassandra Palmer series, also by Karen Chance. They take place in the same world, and have many of the same characters, except that the heroines of the two series have not met... yet. I am not sure if there are any plans in place for that to happen, but I know that I am waiting on pins and needles for the day that Cassie and Dory meet.
As stated in my WoW post, Karen Chance is one of my absolutely favorite authors. And has been for YEARS. I am always on the lookout for a new book or even short story from her. And most likely any short story she writes, or any anthology she appears in, the story will be set in this world she has created between these two series.
Also on her website Take a Chance she also has freebies, such as short stories usually centralized around one character. 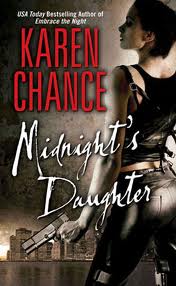 From Goodreads:  Dorina Basarab is a dhampir-half human, half vampire. Subject to uncontrollable rages, most dhampirs live very short, very violent lives. So far Dory has managed to maintain her sanity by unleashing her anger on those demons and vampires who deserve killing.

Now Dory's vampire father has come back into her life. Her Uncle Dracula (yes, the Dracula), infamous even among vampires for his cruelty and murderous ways, has escaped his prison. And her father wants Dory to work with gorgeous master vampire Louis-Cesare to put him back there.

Vampires and dhampirs are mortal enemies, and Dory prefers to work alone. But Dracula is the only thing on Earth that truly scares her, so when Dory has to go up against him, she'll take all the help she can get… ...

************************************************************
Dory is a character with a huge chip on her shoulder. Although after learning about her, it is easy to see why. She isn't quite human, so she doesn't fit in with them, but she is also outcast by the vampires as well. So she has had to make her own way in the world the only way she knows how: killing vampires, demons and things that go bump in the night and are out to hurt and maim.
She hasn't had the greatest relationship with her father and tries to stay as far away from him as possible. Dory feels that everything bad in her life comes back to him, and that he doesn't care about her except for what she can do for him.
Dorina, like just about all of Chance's female characters, is a kick ass stand up for herself kind of girl. She is definitely good heroine material, even if she doesn't quite make it to role model status. She is a bit too angry and vengeful for that. She doesn't shy away from a fight, but will not leave anyone behind if they get caught up in something that could be detrimental to their health.
Louis-Cesare, who we first meet in the Cassandra Palmer series as a supporting character, is brought out front and center as the vampire sent with Dorina to not just fight with her, but to keep an eye on her for her father, as well. At first he seems like a stuck on himself old fashioned stuck in his time vampire, but there is much more to him and his past that we don't find out fully, that makes him keep other people at length, no matter how drawn he is to them.
As in any of Chance's books, there is much action, quite a bit of humor, and even some steam (can't really be classified as Romance, IMO), and is a great read. 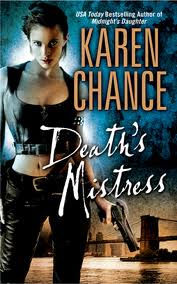 From Take a Chance:  Dorina Basarab is a dhampir—half-human, half-vampire. Subject to uncontrollable rages, most dhampirs live very short, very violent lives. So far, Dory has managed to maintain her sanity by unleashing her anger on those demons and vampires who deserve killing.

Back home in Brooklyn after the demise of her insane uncle Dracula, Dory’s hoping her life is about to calm down. But then she gets some visitors. A friend wants Dory’s help in finding a magical Fey relic, and the gorgeous vampire, Louis-Cesare, is desperate to find his former mistress Christine. 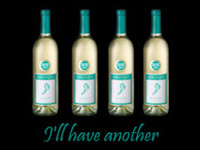 If you have not had the pleasure of reading anything by Karen Chance, you are sorely missing out. And although you don't necessarily have to read the Cassandra Palmer series to enjoy or follow this one, I don't know why you would want to miss out on that. I highly recommend these books.