the Night Sister by Jennifer McMahon 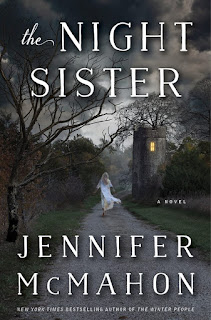 
The Book: Once the thriving attraction of rural Vermont, the Tower Motel now stands in disrepair, alive only in the memories of Amy, Piper, and Piper's kid sister, Margot. The three played there as girls until the day that their games uncovered something dark and twisted in the motel's past, something that ruined their friendship forever.
Now adult, Piper and Margot have tried to forget what they found that fateful summer, but their lives are upended when Piper receives a panicked midnight call from Margot, with news of a horrific crime for which Amy stands accused. Suddenly, Margot and Piper are forced to relive the time that they found the suitcase that once belonged to Silvie Slater, the aunt that Amy claimed had run away to Hollywood to live out her dream of becoming Hitchcock's next blonde bombshell leading lady. As Margot and Piper investigate, a cleverly woven plot unfolds—revealing the story of Sylvie and Rose, two other sisters who lived at the motel during its 1950s heyday. Each believed the other to be something truly monstrous, but only one carries the secret that would haunt the generations to come.

My Review: I was intrigued by the blurb of this story but was not 100% sure it was what I wanted. I decided to take a chance on it. I am so glad I did. The beginning started out a little slow and I admit I did get a little lost at first switching back and forth from the past and present BUT...IT WAS TOTALLY WORTH IT! I truly enjoyed this story.
At times I was not sure who was what and had no idea what was real. THAT is good writing in my opinion. I love when I cannot figure out the "mystery" to a story and if there is a supernatural twist or not. HUGE KUDDOS to author Jennifer McMahon for this!
This story actually had almost everything I love in a story! It had a magical aspect to it (you will have to read it to find out if magic is actually involved or not just like I did though), past and present, mystery, intrigue, great characters, GOOD WRITING, well developed plot, surprises through out the WHOLE story..it really had it all! I will DEF read more by this author if this is how all of her books are!!!
Thank you author Jennifer McMahon for letting me into your world!!!! PS I JUST realized this author is the SAME author that wrote The Winter People. NO FREAKING WONDER I loved it. The Winter People is one of the BEST books I have read for just picking a random book. Off to stalk this author!!! I love her brilliant mind!!!!!

About the Author: I was born in 1968 and grew up in my grandmother's house in suburban Connecticut, where I was convinced a ghost named Virgil lived in the attic. I wrote my first short story in third grade. I graduated with a BA from Goddard College in 1991 and then studied poetry for a year in the MFA in Writing Program at Vermont College. A poem turned into a story, which turned into a novel, and I decided to take some time to think about whether I wanted to write poetry or fiction. After bouncing around the country, I wound up back in Vermont, living in a cabin with no electricity, running water, or phone with my partner, Drea, while we built our own house. Over the years, I have been a house painter, farm worker, paste-up artist, Easter Bunny, pizza delivery person, homeless shelter staff member, and counselor for adults and kids with mental illness -- I quit my last real job in 2000 to work on writing full time. In 2004, I gave birth to our daughter, Zella. These days, we're living in an old Victorian in Montpelier, Vermont. Some neighbors think it looks like the Addams family house, which brings me immense pleasure.
Posted by Unknown at 10:21 AM